Alexander Campbell Earle, co-founder of the Delta Tau Delta Fraternity and Confederate veteran, was born in South Carolina in 1841. Prior to the Civil War, Earle attended Bethany College in Virginia, where he co-founded the Delta Tau Delta Fraternity. After the War Between the States broke out, he left Bethany and returned to Anderson, SC and enlisted as a private in Company B of the 4th South Carolina Infantry. The 4th Infantry was organized at Anderson in March, 1861, and was soon moved to Virginia, where the men fought at the Battle of First Manassas. The men of the 4th Infantry typically enlisted for only six months or a year’s service, and, by March, 1862, were mustering out of the army.
With so many men leaving the regiment, in April, 1862, was consolidated into five companies and renamed the 4th South Carolina Battalion. Earle does not appear to have served in the 4th Battalion, as he formed his own company, of which he was elected captain, A. C. Earle’s Company, South Carolina Cavalry.
Following the War, Earle moved to Arkansas and in 1872, he moved to Texas. He eventually settled in Campbell, Hunt County, where he worked as a carpenter. On March 19, 1915, following his wife’s death, he moved to Austin to live in the Confederate Men’s Home, where he died on December 10, 1916.

Delta Tau Delta erected his headstone and the Gamma Iota Chapter of the fraternity at the University of Texas at Austin still makes annual pilgrimages to his grave. 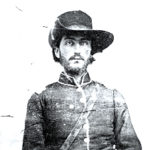