Weary (aka “Wary”) lists his father as Phillip Blair on a Union County marriage license in December 1867. His bride was Viney Moore, d/o of Edman Horne. They were married Dec. 21, 1867. He would later marry again to Eliza (Liza) Brown per family history. Weary was known for his fiddle playing and his enthusiastic approach to life. Raised with his master’s son, Thomas F. (Frank) Clyburn, Weary went to war with Frank, becoming his bodyguard and servant. Frank was a Captain with the 12th SC, Co. E. Weary applied for a pension for his service in the War Between the States on February 1, 1926. He was one of the first persons of color to receive a Confederate pension in Union County, NC. Per his notice of death in The Monroe Journal, April 1, 1930 (page 1), Weary was buried “wrapped in the Confederate uniform of gray”. His grave was marked in the summer of 2008 by the SCV, James Miller Camp 2116.

Note: Grave is found on the original burial grounds of what is now known as Hillcrest City Cemetery. 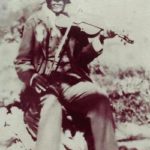