War Between the States Veteran US Congressman. Served in the Confederate Army during the War Between the States. Elected to represent South Carolina’s 1st District in the United States House of Representatives, serving from 1891 to 1894. Also served as a Member of the South Carolina State House of Representatives from 1882 to 1890, and Judge of the United States District Court for the District of South Carolina from 1894 to 1911. During the War (1861-1865), at the Battle of Seven Pines, Virginia, he lost an arm. 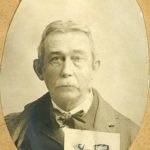