He was taken prisoner at the Battle of Spotsylvania, May 12th, 1864. He was imprisoned at Pt. Lookout, Md.,  though the summer until transferred to Elmira, NY and received there August 6th, 1864.

He died on Sept. 23rd, 1864 of chronic diarrhea. He is buried at Woodlawn National Cemetery at Elmira, site 355.  He left behind eight children. 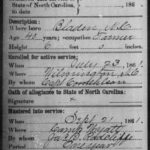