Edward, who was a physician, was elected on September 21, 1861, as first lieutenant, Mounted Squadron of Rifles, and promoted to captain on September 5, 1862. His company in 1864, became Co. K, 7th Regiment of SC Cavalry.

Major Boykin was wounded on May 30, 1864 and was sent on medical furlough June 6th. He was paroled at Appomattox Court House on April 1865.

Edward was the author of The Falling Flag. Evacuation of Richmond, Retreat and Surrender at Appomattox that was published in 1874. It is dedicated to:

“The Officers and Men of the 7th South Carolina Cavalry, this short account of an interesting period in their military history, and that of the cause they loved so well, and for which they fought so faithfully, is dedicated, by one who considers having been their comrade the proudest recollection of his life.” Family links: 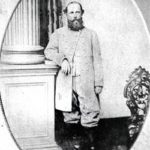