Born in Camden South Carolina. Married to Elizabeth M. Kennedy. Member of General Kershaw’s staff with rank of lieutenant, CSA. Killed at the Wilderness. War letters are in the Museum of the Confederacy.

A poem by Captain Alfred English Doby (1840-1863) of Camden, South Carolina. Doby fought in the 2nd South Carolina Infantry and mailed this poem to his wife Elizabeth McMillan (Kennedy) Doby on January 22, 1863. The poem is about Elizabeth’s letters to him, which he burns after reading:

Farewell, sweet messengers of Love,
Thy heaven-like mission’s filled
On my heart thy sweet words are left
In my bosom, joy instilled.
Thoux must perish in the flame,
A sacrifice to Love’s demands,
For should the vandal in this strife
Stand o’er my body slain
He ne’er shall touch the sacred page
Or coarsely mock affection’s name.

In 1957, Elisabeth Doby English wrote: “Over the mantel in a certain Nashville, Tennessee, home hangs the portrait of a handsome Confederate officer in his uniform that the small boys of the household call ‘The Man over the Mantel.’” That portrait of Captain Alfred English Doby was painted by William H. Scarborough in 1865 from a Civil War photograph. The young, small boys of the household were yet to learn about this Confederate officer from Camden, S.C. Elisabeth Doby English did learn about her grandfather in great detail. Elisabeth’s father was Beverley M. English, and her mother was Elise Kennedy Doby, the only child of Alfred English Doby, “the man over the mantel.” 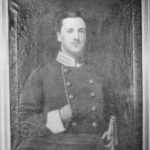 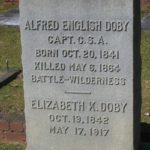 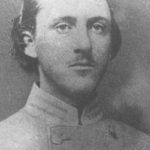