Simon Peter Graham was born on August 11th, 1834 in Roanoke Virginia to humble farmers John and Elizabeth Graham. Simon spent his young years hunting with his father and helping tend to the fields along with elder brother James. In 1858 the responsibility fell to 24-year-old James, and 14-year-old Simon to handle the farm after their father John died.

In 1860 at age 26 he was still taking care of his aged mother and the farm as tensions across the nation rose to a boiling point. The American War between the States began on April 12th, 1861. Simon Peter enlisted and was mustered into the Confederate Army on April 13th. He was assigned to I Company “The Roanoke Grays”. In his first taste of the war, Simon’s 28th Infantry Regiment marched east under General P.T. Beauregard, and Simon served in combat during the First Battle of Bull Run. He fought in scattered skirmishes and battles across north-eastern Virginia for about half a year and enjoyed a lul in action under the command of Colonel Cocke. But immediately after winter passed, he was back in action. in early spring and summer of 1862 Pvt. Graham served during the various defensive battles of the Peninsula Campaign. He served in combat in that period in the Battle of Seven Pines, Battle of Malvern Hill, Battle of Williamsburg, Battle of Mechanicsville, Battle of Gaines Mill, Battle of Frayser’s farm, and the 7 Days Battles.

In August 1862 Simon returned to the battlefield at Manassas for the Second Battle of Bull Run where his brigade contributed greatly to yet another victory over Union forces on the field. Emboldened by Second Bull Run, the Confederacy made its first invasion of the North with the Maryland Campaign. General Lee led 45,000 men of the Army of Northern Virginia, Including Simon and the 28th, across the Potomac River into Maryland on September 5. On September 17th the bloodiest day in American History began in the fields on Sharpsburg at the battle of Antietam. Starting at 6 AM, Pvt. Simon survived the bloodbath that was dubbed by officers as “Artillery Hell” that rained on his outfit. Simon survived the hellish day unscathed and retreated back across the Potomac River back to Virginia. During the 4 day battle of Fredericksburg in December, Simon and his unit defended the position on Mayres Heights, and repulsed the Union forces in one of the biggest confederate victories of the war, with the Union having 4 times the casualties as the Confederates.

On June 27th, 1863 his Brigade was camped in Chambersburg, but was called up for preparation for the Battle of Gettysburg, and they had a forcefully hastened 30-mile march. They arrive in the early morning hours of July 1st when it was still dark. They were lined up in combat formation and hidden from enemy eyes. General Lee himself rode past and solemnly inspected the brigade. Brigadier General Hutton, Brigade commander, led his men himself into the battle that he recalled in 1888 as “A shuddering recollection of the red hot throat of war”. On the 3rd,the 28th was resting in the shade during the afternoon of the last day of battle, when the last push that was Pickett’s Charge was raised. Simon, stranded from his Artillery company, joined the infantry in this charge. During this battle half of the 333 Men of the Regiment were wounded or killed in action. It is then I believe that Pvt. Graham was Wounded in Action. It is passed through the family from his daughter, Virginia Lee, that he was wounded during Pickett’s charge, but we can not say it is 100% true, but likely. Simon’s Brigade would gain credit in the Confederate army for its heroics that day.

He would serve during the Overland Campaign in late 1864 during the battle of Cold Harbor, and during the Petersburg Campaign at the battles of Petersburg and Richmond in February 1865 nearing wars end. On April 1st the battered 28th Infantry Regiment was ordered by Lee to defend the Five Forks crossroads “At all hazards” due to its strategic importance. The Union army’s assault caught the defenders off guard and the 28th Infantry regiment was decimated beyond recognition. The survivors of the battle, including Simon, fled south in a desperate retreat to attempt to ford Hatcher’s run where they planned to cross the Potomac and rejoin the rest of the Army of Northern Virginia they were now cut from. The Union attacks the next day brought Lee’s final retreat to Appomattox Court House. On April 6th, 1865, the exhausted and starving 28th Infantry Regiment attempted to cross the bridge at Saylers Creek, but the bridge only bottlenecked them and overwhelmed them with Union forces. The survivors, including Simon, surrendered shortly after and where taken as Prisoners of War. on April 9th, 1865, the American War Between the States ended, and after being a POW for 3 days, Simon was released to return home. It was only a day walk, and Simon had returned home by April 11th, starving, exhausted, and still wearing his tattered uniform.

Shortly after his return, he married Martha Stanback. Adjusting to life after the war was not easy for Simon, and his daughter Virginia Lee noted his deep trauma from the war and his experiences. But in what was left of his home he rebuilt his farm and had 3 children between 1865 and 1870, 2 daughters and a son. In 1870 he and his family moved to Tennessee, then briefly Alabama, then again Tennessee in search of a better home. He and Martha had 4 sons and 3 daughters between 1872 and 1886. The first of the Tennessee children was Virginia Lee Graham, born in 1872. He did well to provide for his children in their new home. The stories about him report that he drove a wagon, hauling convicts to work in the coal mines or coke ovens in Tracy city Tennessee after the war. Simon Peter Graham died on February 20, 1898, in Tracy City, Tennessee, when he was 63 years old. His wife would follow him in death in 1903. 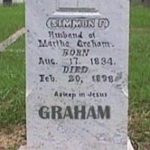 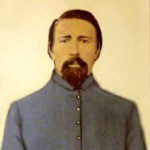