Greer, July 15 — John Garvin Greer, 90, Confederate veteran and prominent citizen of this section died Tuesday afternoon at his home in the Pleasant Grove community after an illness of four years.

Funeral services were to be held Wednesday at 5:30 pm at the Pleasant Grove Baptist church, by the Rev. George Hopkins, the Rev. Paul Beacham, the Rev. D.D. Flannigan, the Rev. R. B. Vaughn and the Rev. Frank Snyder. Interment was to follow in the churchyard.

Known to many friends as “Captain Greer” , Mr. Greer enlisted at the age of 16 in the Confederate army, serving in Company F, 16th Regiment commanded by Capt. G.W. Holtzclaw. 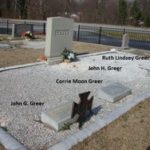