Born in Georgia, but lived in North Carolina…  Fought as part of Thomas Legion of Cherokee and Highlanders, the last unit east of the Mississippi River to surrender.  Wounded twice, he was released to go home for recuperation, and returned to his unit both times.  He served through the end of the war, and signed his oath of allegiance along with the rest of his unit. 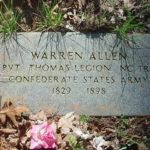 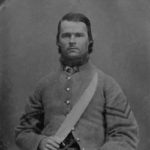