The fifth Regiment of North Carolina Infantry (Volunteers) was organized in June of 1861 with twelve companies, A to M.  Its designation was changed to the 15th Regiment of North Carolina Infantry in November of 1861.
Pappy Jake and John enlisted as privates on July 15, 1862 for three years in Raleigh. Pappy Jake is shown as a conscript (draftee).  They are listed on the Company Muster Rolls as having been paid on October 31, 1862 by Captain Thomas.  John was 27 and Pappy Jake was 18 when they went off to fight.

John is listed on a register of the C.S.A. General Hospital in Danville, Virginia on September 12, 1862 with a complaint of debilitas.  The record notes that he returned to duty on September 16.  The record shows that John was present at the Battle of Fredericksburg on December 13, 1862.  He received a gunshot wound to the chest during this battle.  He is listed as wounded in action.The record of Chimborazo Hospital No. 6 in Richmond, Virginia shows that he died there on Christmas Day of 1862.  The US War Dept. has an Inventory of the Effects of John T. Brown which lists the following:
One Pocket Book containing $3.00 is worthless and $25.41 good.  Total $28.41  There is also an item labeled No 12  Inventory of the Effects of John T. Brown late of the 15th N.C. Regiment Who died at Richmond, Va  December 25, 1862  Marked as received Richmond on 13 / 63 from Capt. C. Morfit the within named effects.  L.L. Smith, Atty.  There are also two hand written documents that are difficult to read.  On Page 93 of the Brown Book is the following entry apparently from the funeral sermon that Rev. K. W. Warren did for John in January of 1863:   “John T. Brown was 28 years 5 months, and eight days old when he died.  Whoever reads of the  life and death of John T. Brown for years to come may learn that he was a pious young man. He was a useful member of the Methodist Church.  He was dutiful son, an affectionate brother, a good neighbor, a kind friend and highly respected by all who knew him.”

Pappy Jake is having been paid on the following dates: December 31, 1862; February 25, 1863; April 30, 1863; June 30, 1863; & August 31, 1863.  The next mention of him in the Company Muster Rolls is the fact that he was Absent having been sent to the Military Hospital in Culpepper Court House, Virginia on November 8, 1863.
He was discharged from the Hospital on November 27, 1863 and given a furlough to go home for 30 days.   Before leaving the Hospital, he was paid for his service through October 31, 1863.
In the Spring of 1864, the following remarks are recorded in the Company Muster Rolls.
“Indebted for knapsack, canteen, haversack, $8.50.  Deserted from home.  Absent without leave since December 27, 63.
Apparently on the way home to the Lasker, North Carolina area he ran into a group of Yankee Troops.  My Grandmother (Ruth Brown)  used to tell me the story of how “Pappy Jake” during the Civil War was somewhere near the Roanoke River with another soldier when they were captured by the Yankees.  They were sent down to the river for water while under guard.  Their Yankee guard was somewhat careless in the guarding them.  The guard was holding his rifle on his shoulder with his thumb somehow sticking out.  Pappy Jake brought down his fist on the Yankee’s  thumb with all his might and broke the guard’s thumb.  He and the other rebel soldier then jumped into the Roanoke River and swam for the other side while the Yankees shot at them.   Pappy Jake apparently decided that he had had enough war at that point, and he never went back to fight.  She used to say that his family helped to hide him from the sheriff and the conscription parties until the war ended about 18 months later. 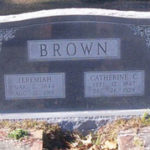 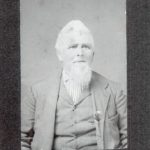