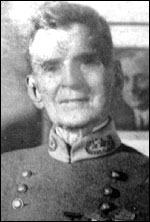 Click HERE to hear a recording of Confederate soldier Julius Howell talking about his capture and imprisonment at the Union prison camp at Point Lookout, Md.
Howell was born in 1846 near the Holy Neck section of Suffolk, in the Holland area. He was the youngest of 16 children, the son of a prominent Baptist minister. His daddy wouldn’t allow him to join the army until he was 16½, he says in his account.

He saw action guarding the Blackwater River against Yankees until his regiment was called to help defend Richmond in 1864. By then, he was a corporal and courier for two generals.

In April 1865, Howell was taken prisoner at the battle of Sailor’s Creek and was transported to Point Lookout, MD., a notorious Union prison. He was there when he heard about the assassination of President Abraham Lincoln.

The youth, a slightly built man with bright red hair, knew what it meant.

“I stuck my head in a tent and said, ‘Boys, there must be some big Yankee dead.’ ”

A guard told the men later that the president had been shot. Howell says he felt no hatred toward Lincoln, only kindness.

After the war, Howell taught at Reynoldson Institute in Gates County, N.C. He soon left teaching and went to the University of Pennsylvania, graduating with a history degree. From there, he went on to Harvard and got a doctorate in history.

Howell was a history professor at the University of Arkansas. He eventually headed the department. In 1901, he was named president of Virginia Intermont College in Bristol, where he served for 50 years.

In 1942, Life magazine did a spread on Howell. Several photos of the old gentleman show him dressed in his Confederate uniform. Because legislators wanted to hear more from the Confederate veteran, Howell addressed the combined Congress of the United States in Washington in 1944, when he was 98, and that is when it is believed this tape was made.

Four years later, in February 1948, on his 102nd birthday, the city of Bristol threw a party. His old friend, actress Mary Pickford, and her family attended.

Howell, who had never been sick a day in his life, died the following June.