Captain Andrew Patterson Calhoun Campbell, the son of Isaac Alexander & Margaret Campbell. He grew up in the Bethel Community just north of present-day Clover, South Carolina. He was educated at Bethel Academy & married Mary McMakin. He fathered eleven children, many before the call to arms. With the declaration of Secession, Andrew went with his brother Samuel to Charleston to enlist and was commissioned Captain in Company G of the 18th South Carolina Volunteers (The Mountain Guards).
Although details are unclear, it is thought he had already begun the practice of medicine before obtaining his commission as he is listed as one of the acting surgeons of the 18th SCV. His serviced ended on May 5, 1862, and he returned to his home in Bethel Community to continue the practice of medicine. Dr. Andrew Campbell was the first and only doctor in Clover, South Carolina in the years following the War. He practiced for over 40 years in this area until the time of his death in 1892. 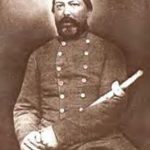