Doyle, William Earl Co G 7th South Carolina Cavalry Confederate States Army CIVIL WAR b. 04/26/1846 Oconee Station, Pickens County, South Carolina d. 09/09/1934 Texas… can boast of twin brothers who served in the war together. They are J.H. and W.E. Doyle, the former a merchant at Granbury, where he has lived for fifty years, and the latter a practicing attorney of Teague, Tex.
They were born in Pickens District, now Oconee County, S.C., April 26, 1846, and they served the Confederacy as members of Company G, 7th South Carolina Cavalry, Gary’s Brigade, taking an active part in the strenuous campaigns of the Army of Northern Virginia down to Appomattox. J.H. Doyle was wounded once. W.E. Doyle served in the thirty-seventy and thirty-eighth legislatures of Texas as senator from the twelfth district, and is likely the last Confederate veteran to serve in that capacity. 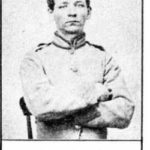