John Taylor Stenhouse was born in Foulden, Berwickshire, Scotland, son of Richard and Agnes (Trotter) Stenhouse. He was baptized by the Revd. Mr. Ure of Ayton, Second United Secession Congregation, on May 26, 1831. John Stenhouse came to America from Scotland with his parents Richard and Agnes and five of his siblings: Adam, Richard, Agnes, Ann, and Rachel, in 1851 on the “Statira Morse.”

His brothers James and George had already come to America in 1847 on the ship “Siddons.”

His siblings Thomas, Jane and Ebenezer arrived in 1850 on “The Harmonia.”

John and all of his siblings except Thomas Stenhouse, George Stenhouse, Ann Stenhouse Gifford, and Rachel Stenhouse Macaulay are buried here and are listed on this marker. 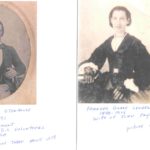